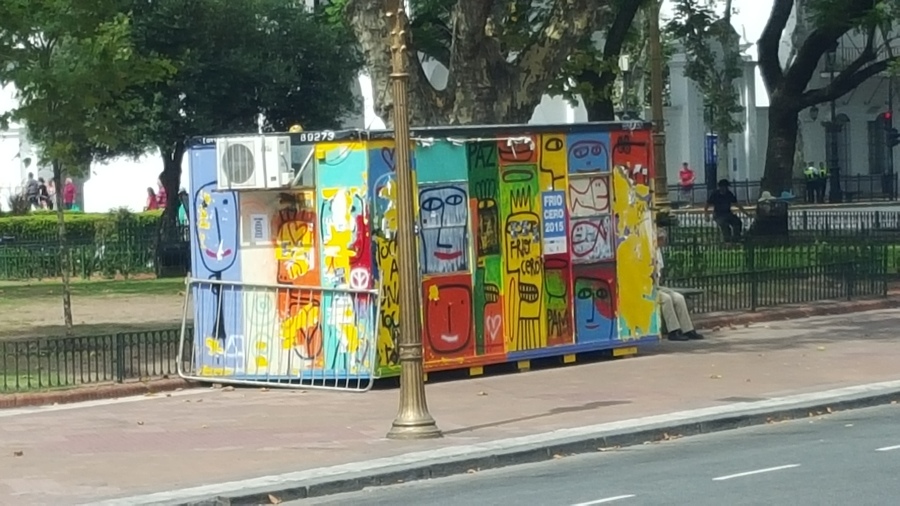 Near my apartment, a hotel with a huge, public-facing brick wall, has enacted a mural. It’s a beautiful mural of a child (6 stories high) and flowers. It draws the eye and I look at it each time I pass.

But yesterday, a bright sunny day, I was out for a morning walk, and I noticed a different brick wall. I had passed this wall a hundred times on one side of the street. This time, I saw it from the other side of the street and the way the light hit the bricks, the sharp shadows cast from a tree above the wall, and the tiny shadows that randomly dotted the wall, cast by tiny somethings that protruded from the wall. I had to stop and admire this huge blank wall. The beauty of the emptiness appealed to me. And yet it wasn’t empty, it was, itself, beautiful.

There are a lot of huge brick walls in the city, where neighboring buildings that used to abut these walls came down, leaving these expanses of brick. Most are covered in something: an advertisement, perhaps one that goes back over 100 years, or one just erected a few months ago and regularly changed; artwork like the child and flowers, or graffiti, or a giant chessboard or a clock.

Pema Chodron speaks of an emptiness that we experience from time to time. You know this emptiness. It’s the feeling that you felt on 9/11, before emotion rushed in. I felt it again in March, when the governor issued the stay at home order. Before that, I felt it on the day that I decided to leave the company where I had worked for 31 years – I had wanted to leave and it was my choice, but I didn’t have a plan so… emptiness.

It stretches before you, this emptiness, like that moment where you are running and trip: while you are sailing through the air, for that split second, there is emptiness. Or when someone says something to you that is so mean, so awful, that it takes your breath away just for a moment. I get it every time my sister texts me to say that my mother has fallen again.

Kurt Lewin speaks of the frozen state where we live most of the time, which shifts into the unfreezing state when change happens, and then the refreezing state. That unfreezing state is so uncomfortable – so unsteady, so frightening, so empty that we want to rush to the refreezing state, to the new normal. It is why so many people cling to conspiracy theories about the virus, why they are so certain that praying or injecting bleach or hydroxychloroquine will protect them and enable them to rush to certainty; why they are so certain that the statistics are a hoax and that people can safely rub noses at a rose garden or cheer and shout at an indoor arena. Or why they rush to buy guns and hoard food or attack people who aren’t like them. Or why they order package after package online; or, like me, bake cookies or brownies or have a drink a little more often than I usually would. Because we don’t like that empty feeling and we want to fill it.

So what to do with this emptiness?

Pema Chodron encourages us to relax into it. To appreciate it for what it is. You can’t put tea in a cup that is already full. It is when you are empty, she says, that you begin to notice things that you had not noticed before, things that perhaps you hadn’t noticed before. The people around you, a cardinal – I heard one the other day while I was walking where I had never heard a cardinal before; I looked up up up and there he was at the top of the tree; he sang a song I had never heard a cardinal sing, and then his mate, a few branches away, in her demure brown coat, replied; they say the humpbacks are particularly vocal this year — the beauty of a blank brick wall when the sun hits it at the right angle.

For me, meditation is an opportunity to practice sitting with emptiness, with the blank wall. I try to notice each time something starts to distract from the emptiness, and thank it and continue to sit with the emptiness, within the possibility in the empty cup. It can be an uncomfortable feeling and my mind often rushes in with thoughts: all these ideas for what I want to write about; that Tom Jones song that I heard three days ago that is stuck in my roof brain; concern about current events; something at work I’m trying to figure out; annoyance at the sounds in the next room or the jackhammer on the street outside my window at 7 a.m. Thank you, I say, back to emptiness. And then repeat the whole process again.

This is what our minds do: success at meditation is not remaining empty, it is noticing the distractions and practicing returning to emptiness.

Sometimes it’s easy, catching myself and returning to open. Sometimes I get amused at all the ways I try to distract myself, like a child making up excuses not to go to bed. Sometimes the timer rings and I realize I have sat in distraction for 15 minutes without noticing once. Well, I’ll have another chance to practice tomorrow…

Somewhere in my apartment I have a book that says that creativity emerges from boredom. That, only when you are bored, do you notice all the things around you and begin to make up stories about them. Having mini-computers in our pocket that we can disappear into on the bus, while waiting at the bank, on long flights, is why we no longer notice what is going on around us.

So what to do about it?

Practice sitting for one minute, for five minutes, for 15 minutes, without filling the emptiness with distractions. Practice leaving your phone in your pocket during little moments of boredom. Have 2 minutes before your next Zoom meeting begins? Instead of trying to respond to a few more messages, just sit. Practice openness, Chodron advises, while doing the chores you hate doing: laundry, dishes, gardening.

Learn to appreciate the blank wall.