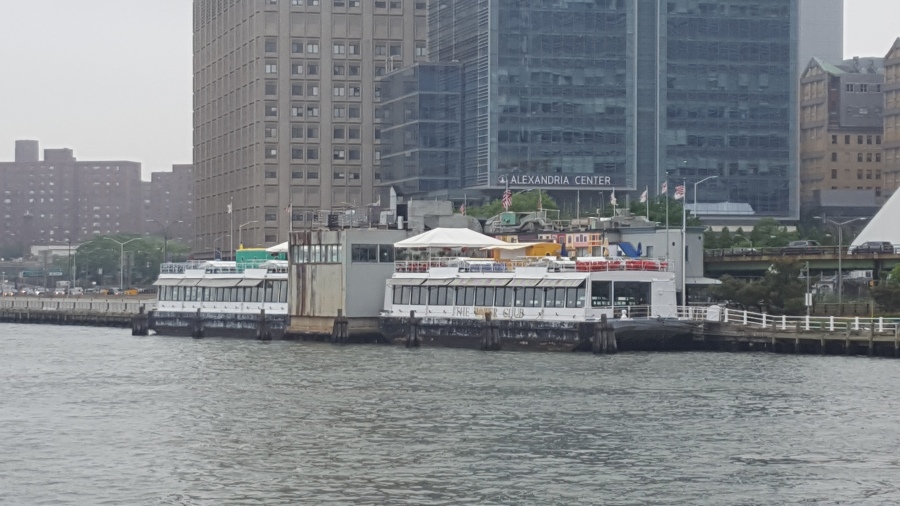 What is it about getting out on the water that is so rewarding?

Several weeks ago, I had the idea of taking the East River Ferry as far one direction as it goes and then as far the other direction that it goes.

We picked it up at 34th Street and rode North to the Bronx. It was a beautiful day – blue skies with light puffy clouds, slight breeze, cool but not cold temperature. In good company, seeing things I hadn’t seen before, I was happy.

We got off at the Northern end and wandered about the small park there, enjoying the sun, watching planes landing at LaGuardia, gulls cracking open clams by dropping them on the pavement, an old shipwreck in wading distance now decorated with graffiti.

Then we took the ferry to the financial district and switched to the Rockaway line. Weaving our way through the Memorial Day pleasure boat traffic, kayakers, fleet week ships, admiring Brooklyn from the water. Trying to remember the last time – if ever – we had crossed the Verrazano-Narrows bridge. Had I taken car service to an early morning photo shoot at a bookstore in the Staten Island Mall, the Monday after the weekend that my old apartment flooded? If I had, did it go through New Jersey or Brooklyn? The answer seemed distant and unimportant.

The houses thinned out, Sandy Hook was barely a spec to our right, and the wind picked up as we faced the Atlantic. Then beachside Brooklyn appeared, a lighthouse, grand old beach cottages and a wide expanse of smooth sand, punctuated with umbrellas and lifeguards, but no people. Followed by Coney Island, looking small and quaint from a distance with none of the carney atmosphere it has up close. The ferry is rumored to go there starting next year; we made vague future plans to take the Ferry there and consume a Cyclones game. Taking the subway home after a game is daunting, a long slog – but the idea of boating home under moonlight is alluring.

On this beach, there were bathers. Families with small children toting wagons filled with shovels and pails and water wings. Women in bikinis, comparing tans. We stopped for lunch at a pavilion, jackfruit that was transformed by an amazing yellow sauce.

We wandered back along the boardwalk to another street, the Rockaway subway stop, and then back to the Ferry. A long ride back after a six hours in the sun, but golden light in the harbor. A quick transfer to another boat home.

I don’t know what it is that draws me to the water. We weren’t a boating family, like my cousins. We didn’t have yachts or sailboats or fishing boats. My parents had a kayak when I was very young but, as we lived in the Pacific Northwest, and they tended to pile all three of us in it with them and venture out to watch SeaWorld catch killer whales, my memories are mostly of being cold, bored, and wet.

And yet, something in the water calls to me and I love being on a small boat, the salty wind styling my hair, my glasses fogged.

It was a perfect day, for less than $10 plus lunch, to be reminded that this is, after all, an island.