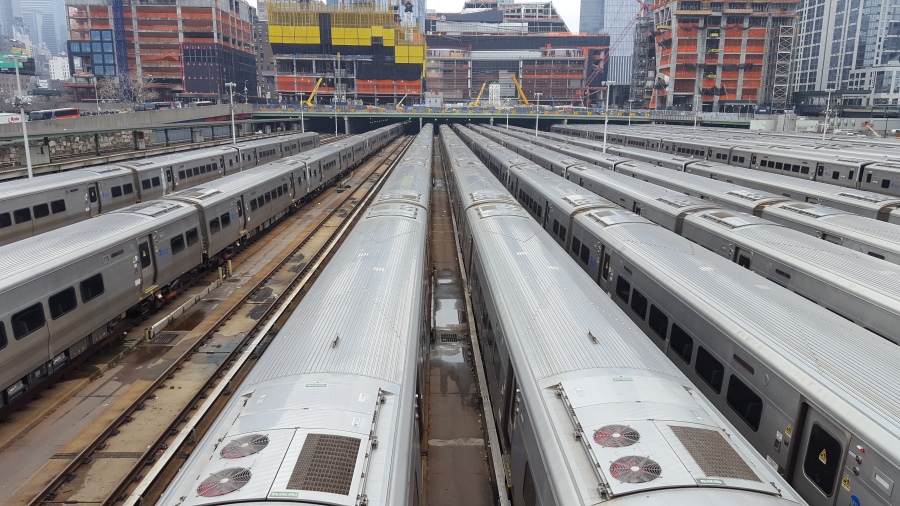 Day 6 of The Move (90 year-old-parents relocating from Florida to Pittsburgh to live with daughter), Friday started well. Despite a lack of sleep — one design flaw for the train: the lower bunk in the handicap room was a single, too small for them to comfortably share, and I wasn’t going to allow either of them to attempt the upper bunk. After my Mother in Law (MIL) decided it was too small, they called the attendant and had him turn it back into seats, and “slept” sitting up. My MIL said she hadn’t slept a wink but she always says that, and is then surprised when I ask about loud noises that had awoken me in the night. “I didn’t hear that,” she says. “You must have been soundly asleep to miss them,” I reply sweetly and change the subject.

Where was I? Oh yes, despite a lack of sleep, my Father in Law (FIL) was much more relaxed and my MIL much more resigned. Her only regret: being sick on the day the movers were there because she would have packed much more.

The excellent Amtrak service continued today, including a young man at the station who whisked my MIL’s wheelchair down the platform, returned to help us to the car even before we knew it was there, and then, while I settled my MIL in the car, told me he’d take my FIL and the baggage to a nearby parking lot where we could repack the car and rearrange the load. That’s service!

We repacked the car, slid the walker between my MIL’s seat and the door. Plugged my phone into the car, figured out the Bluetooth so I could actually hear it through the speakers, and set off on what should have been a 4.5 hour journey.

Hitch 1: we needed gas. By the time I remembered that and found a station, the little “you need gas” light was on. That side-trip added at least 30 minutes.

Hitch 2: (not really a hitch) we stopped for lunch. Just before we stopped, Google Maps told me that we should arrive by 2:30 – we were making great time. When we left, it revised that to 4:06. Things just take longer. Including moving everything that my FIL had repacked while my MIL and I were in the bathroom, so that I could see out the windows again. And then packing everybody in, followed by reopening the doors to hand my FIL the cakes and my MIL the spoon vase, which she was convinced must weigh less than cakes. And, as I walked from the passenger side of the car to the drivers’ side, sneaking in a call to the office to try to resolve a client issue that just wasn’t the main thing on my mind that day. But I still felt positive.

The scenery was beautiful. My FIL was impressed that Google had found a route that had less traffic and more beautiful roads than he had ever found. It had more tolls than we had expected but my frugal in-laws were surprisingly ok with that. My MIL and I treated ourselves to a snack at McDonalds and discussed the scenery amicably. It was one of the best conversations we’d had in a long time. Peaceful, quiet, drive through the civil war south.

And then it occurred to me that Google maps had said something about an exit coming up in five miles about ten miles ago. I checked and my phone’s battery was completely dead. Completely. What a way to find out that my FIL’s USB port – that he had never used – was broken. No problem, I always carry a cigarette lighter power adapter, and I plugged back in. As soon as it was up to 2%, I was sure I could reconnect.

Meantime, I pulled off and asked a local how to get to Pittsburgh. Just stay on the same road I had been on and switch to 51. No problem. Except that it was now 5 pm on a summer Friday, 51 is a local road, and it started to pour, I mean phone-buzzing flood alerts, can’t see a foot in front of the car, pouring. We made it most of the way into Pittsburgh, I fired up the phone enough to quickly jot down the directions in case she died again (which she then did), and we plowed forward.

Kudos to my FIL, forgetful as he is about things that I tell him, he directed me from the freeway to the housing community where my SIL lives, from memory. I was constantly surprised this week how savvy he is in managing my MIL, outsmarting her, knowing when to give and when to stand firm, how to get her moving again, how to handle her stubbornness (a quality I also possess, I am told by some husbands which must be why he loves me). And, despite her unreasonableness and forgetfulness, my MIL has memorized the phone numbers of her children (home and cell) as well as her neighbors, friends, and relatives (handy when your phone book is somewhere in a Fragile Basement Storage box in a moving van that won’t arrive until next week) – how many of us can say that anymore?

Finally we reached the house. (Google Maps kicked in just as I pulled into the driveway to inform me that my destination was on my right. Thanks.) Following my Sister in Law’s (SIL’s) instructions – she was out of town and would arrive the next day– I unlocked the front door and trapped the cats in the powder room until we got my MIL in the house. We pulled the car into the garage and navigated my MIL up the stairs, through the kitchen, and I rushed to chase the cats out of the bathroom.

Except that one of the cats had curiously opened the bottom drawer of the vanity. The drawer right next to the door. The door that opened into the room. So now the door could only open a half-inch. The cats were trapped in. And MIL was trapped out of the only bathroom that didn’t require climbing or descending a full set of stairs. She was tired, hungry, stiff from sitting wedged in amongst her treasures (and cakes), and in urgent need of a bathroom. The cats were playful (oh, look, fingers!) and unhelpful. I finally found a yardstick, poked it through the door, pushed the back of the drawer far enough to close it, and chased the cats out.

Problem solved, I raided the fridge for the foods my SIL had left for us. Except something had happened and they were frozen solid. Ok, I found something else, and sent my husband and his sisters a terse note that the eagle had landed, but that the phones needed recharging and the parents needed feeding before they were up to talking to anyone on the phone. Attentive and loving kids that they are, they had been calling every night and sometimes during the day (usually while I was trying to navigate heavy traffic or argue with movers or something) with encouragement and love. After dinner – including leftover birthday cake – we charged the phones and caught up with everyone.

Although the day was stressful for awhile, the situation was made better because we all remained calm. I stayed calm while finding a place to pull over and charge the phone and figure out directions without a map. My FIL stayed calm while letting me drive although I took a different route and then lost the GPS. My MIL stayed calm although she was tired, cramped by all the stuff packed around her and on her lap, and had to use the bathroom that the cats locked her out of.

Remaining calm removed a distraction. If I had needed to focus on them at the same time that I was trying to pry open the bathroom door or find my way in the driving rain, it would have made things much worse and I would have been much more prone to mistakes.