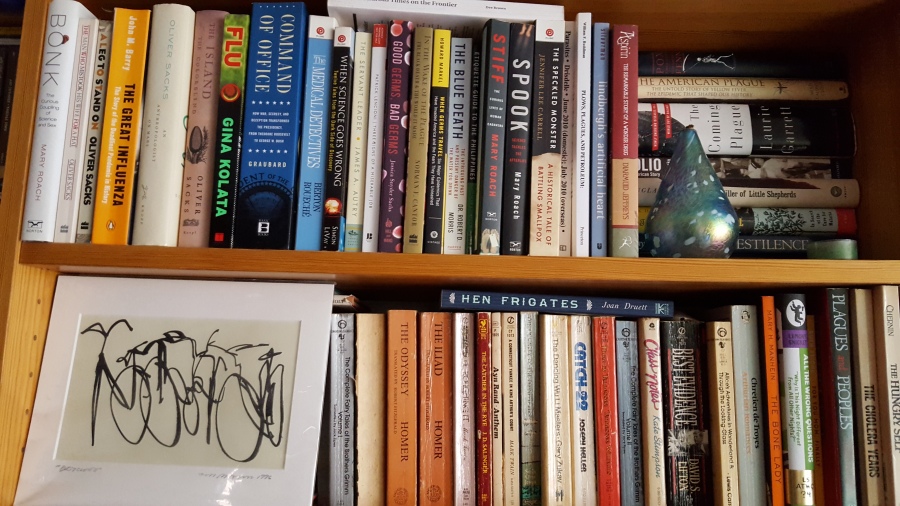 I’m reading a new book: A Curious Mind. I picked it up at the Housingworks Bookstore while I was waiting to meet a friend for tea on the wrong day because apparently, as organized and detail-oriented as I am, I can’t walk and chew gum at the same time and I keep looking at Gmail and then carefully recording the wrong meeting dates in my GCalendar. Sigh.

Anyhow, this book attracted me because I also have a curious mind. I’m curious about people who love their jobs, whatever their jobs are. I want to know about the guy who sits in the little booth on that weird revolving bridge over the wetlands, the one that you see off to the left as you take the Turnpike out of NYC towards Newark. What does he do all day? How does he entertain himself? What is his purpose there? Does he like what he does?

I’m curious about how events affect people. How did the plagues and the natural disasters of the past shape the people who lived through them? What happened before we had aspirin, how did they discover it, and how have analgesics changed over time? How have our perceptions of sharks, or tigers, or mosquitos affected how we approach the natural world? What happened when

What fascinated me about this book is how the author – the famous producer, Brian Grazer – cultivated his curiosity, took actions to nurture it, and leverages it professionally, to make successful movies.

How did he do this?

First, he recognized curiosity as a thing. How many times do we see ourselves clearly in the mirror and say, “Hey, this thing I do, this is something unique. If I get really good at this, I can do it all the time.” Not very often. When we have a talent for something, it is often something so innate that we don’t recognize that others lack this ability.

How do you recognize something you can’t even see? One way is to catch yourself making a fundamental attribution error, where you assume that someone who is driving you nuts is doing it deliberately. For example, you might say, “Wow, my super really doesn’t like me. When I reported a flood in my apartment, he showed no sense of urgency at all – it took him 40 minutes to turn off the hot water. When a reported a second leak, he was too busy chatting to someone to check out the leak and just kind of waved it away as something that would be taken care of later.”

Yes, it’s possible that the super’s lack of urgency is because he doesn’t like you. Or maybe you have a skill for customer service that he doesn’t, a skill that comes naturally to you. You may never have been in a customer-facing position, but even recognizing what’s wrong with someone else’s customer service is an indication that you may have the capacity to be great at this, if you work on developing it into a skill.

After saying to himself, “Hey, this curiosity thing, it makes me special,” Grazer focused on developing his curiosity by practicing it. How do you practice something like curiosity? He asked questions and he listened to people. He took an entry-level job at a movie studio delivering legal papers to movie stars, directors, and writers for their signatures. It was just a summer job, and he took it because it had “legal” in the title and he planned to study law. When he saw that it gave him a chance to learn about people he would otherwise never have a chance to meet, he made a point of telling whoever answered the door for these people that it was his job to deliver the papers directly to the person who had to sign them. Once he was face-to-face with the person, he started chatting, and stayed open to where the conversation went. At that point, I get the impression, he was mostly curious about the movie industry, how movies got made.

He set himself a goal to talk to one new person every day. He was shameless in his approach [another hidden “talent”], asking complete strangers to talk to him – that’s how he met Ron Howard. He called him on the phone and, told him he was a producer and that he thought they had similar interests, and invited him to come up and talk to him, and it worked. Eventually they became partners, going on to produce films like Splash and A Beautiful Mind.

Want to practice your own customer service skills? That one’s easy: everyone is a customer, practice with them, in your daily life. You could also take a job as a mystery shopper – they’re trained and paid to evaluate customer service, and you can do it as a side gig.

By being curious, Grazer discovered a secret about movies: there are only four different kinds out there, and the only way to succeed is by telling the story differently. That’s what his curiosity gave him – unique insights about people that let him tell a story differently.

Not everyone agreed to speak to Grazer. He points out that, in Hollywood, the default answer is No. Another capacity he recognized in himself was his tenacious persistence, his ability to hear No all the time, and keep going anyway. Even when he asked to meet with someone and they said, No, he saw it as a chance to practice asking for the meeting.

This is true about everything in life. How many frogs did you have to kiss to find prince charming? How many jobs did you take before you found one that you loved? How many potential clients did you talk to before one said Yes?

A friend in digital marketing was once elated with the performance of her latest email campaign because the open rate was something like 4%. I asked if I had heard that correctly – 4% sounds like nothing – and she said, yes, a typical open rate is something like 2.5% and 4% was unbelievable. When you go to stores and they ask you to join their loyalty program, if you say Yes, that’s called “a conversion.” I used to listen to associates complain about how impossible it was to achieve their astronomical loyalty conversion targets – these targets were, for the most part, single digit. That means that out of every 100 people that are invited, only a handful have to agree for you to hit your target. A lot of salespeople gave up asking because they got discouraged by the number of times they were told No when, if they would have just persisted, they would have met or exceeded the target.

When you’re in a business of numbers, you can’t let the No’s discourage you. Your ability to get out of bed and keep going, keep writing, keep reaching out, keep moving forward, is what earns success. Grazer uses his “curiosity conversations” as an antidote to hearing No all the time, a way to stay confident in his own ideas.

That advice helped Grazer get more strategic about his curiosity. Instead of meeting one new movie person each day, he started reaching out to people outside the industry. He also became very targeted with his curiosity. He didn’t just pick someone with an interesting story and ask them all the same questions that a reporter would ask them. He wondered something specific about them – what’s it like to obtain and wield power? What’s it like to want to build a weapon that could end the world? What’s it like to face torture and interrogation every day and know that no one else will help you survive? Sometimes he asked the questions directly; sometimes he just spent time with the person asking other questions, and observing the person’s behavior or how they made him feel.

So often we want to skip the learning process and go straight to success – I’ve found this is especially true of younger people, who want to change the world NOW, without learning how it works first and how they fit into that framework, but I make the same mistake myself. It would have been easy for Grazer to say that he wanted to make movies and maybe if he had some of those advantages – the money, the contacts – he could have talked his way into the business, but would he have been as successful as he is today? The process he used to figure out and hone what made him different from other people is what makes his movies successful, and what makes him successful as a producer.

I’m curious: What’s your fundamental attribution error? Could it indicate your “secret sauce?”