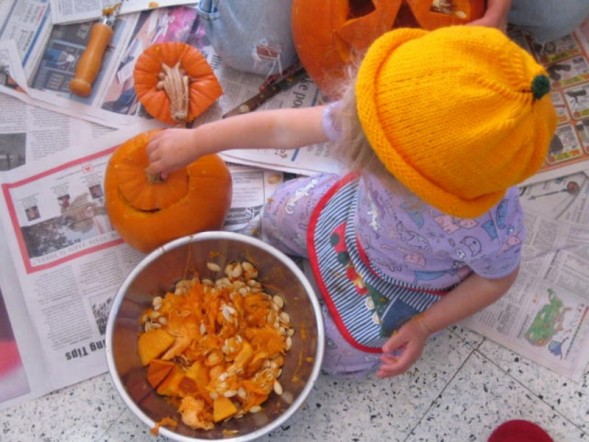 When I was younger, Halloween was my holiday. I loved dressing up as someone else and feasting on candy or – later – going to a party and the liberty that being someone else gave me.

First memory, going to the library in town for a Halloween party. Too small to understand even what we were doing. They passed around a closed bowl, reach in and feel the eyeballs. I pulled one out, a peeled grape. Puzzlement. This was fun? Feel the guts… spaghetti?

By first grade, I was into it. Dressing up as a devil, red leotard and stockings, red face-paint, plastic horns. It felt grimy and too tight. We lived remotely on the island, our house too far from neighbors to walk. My mom drove me to the houses of friends – Marky, who lived around across the bay; his grandfather who lived by the lighthouse just before the big bend into town; Kimmy’s house in the suburb on the other side of the hill – or maybe not Kimmy, as I think back now, her family’s religion probably didn’t allow for Halloween; and finally Andrea’s house. I climbed up the steps onto the paint-peeling porch, knocked on the door, my mom waiting by the car. Andrea opened the door then fled screaming. Her big sister looked at me, laughed, and then went after her. Andrea was mad at me because she had been scared. I couldn’t figure out why she was scared. But the darkness – the true darkness of country roads, vast fields unlit, a huge moon drifting amongst the racing clouds. The bite of autumn air. Being out in the night, that was what made Halloween special.

By the time I was an annoying pre-teen, we lived in a neighborhood, a suburb. My friend Susan and I took my sisters out. As we walked, we practiced cheers – don’t ask me why — swinging our huge paper grocery bags over our heads as we chanted, then arms outstretched… and a neighbor boy on a bike sped by, grabbed my bag, and disappeared into the darkness. Shock. A brief burst of anger quickly gone – it wasn’t about the candy. It was about being out on our own in the dark, showing people our costumes.

In high-school, every weekend was Halloween because I had discovered Rocky Horror. Now it’s canned, on TV every year. Then, it was still edgy, forbidden. We dressed up as the characters – I was always Janet though I knew that inside I was really Columbia – packed up our toast, our squirt guns, and invaded the tiny picture-show theatre in the old part of town. For three years, I chanted along with the characters, did the time-warp in the aisles. Then away to college and when I returned, Rocky Horror had moved to the multi-plex at the mall: the movie conglomerate that had tossed us out one rainy afternoon when we were the literally the only people in one of the theatres and had dared to speak along with the jokes in Airplane! (a movie crying out for a Rocky-Horror treatment if there ever was one), out on our ears! They took over Rocky Horror. I went gone along with what was left of the old crowd but the magic was gone. Even my mother went for crying out loud – not with me, with my little sister — and then misbehaved shockingly at Denny’s afterwards, aiming her squirt gun into a square man’s ear. Alas.

In New York, I loved going to the Halloween parade, seeing how other people dressed up, delighting in the creativity that they brought to their costumes, thrilling to the recognition and especially the group costumes – a dozen eggs being chased by a chef and a giant whisk. The music, the freak flag that flew high, the Bread and Puppet Theatre puppets looming over the crowd, the license to misbehave – it was like the swell of music that lifts your chest, carries you above the every day.

I loved the thrill of being out after dark, candle-lit by jack o lanterns, the autumn breeze carrying the smell of wood fires, swirling dried leaves around our feet. One year, it belled the skirts of my ball-gown, and tumbled a giant empty paper-bag before me. Enlivened by the wind, I swept up my skirts, lifted my foot to drop it and pop the bag, realizing just in time that it was not a bag but a fast-moving rat. Ah, New York.

As I grew older, being out in parade crowds began to appeal less to me. Being pressed, separated from friends, carried by an unrelenting stream of people. Unable to see as well as I’d like, constantly being pushed further and further away from a clear view. My feet hurt. So I stayed home to welcome trick or treaters, dressing up as my cat to greet them at the door instead. In the big buildings here, residents sign up at the front desk to receive kids; kids know exactly which doors to knock on. Sometimes there’s a party, too, where they can drink sugar-water and compare costumes. But many of the kids that I met the year I moved in and watched grow have gotten too big for trick-or-treating now and, instead, go out with friends.

For awhile, at work, I’d dress up. Maybe wear a suit that day (I detest suits), paint a couple of fang marks on my neck. One year, I went full out, wig and all. And was unrecognized. Hah!

In Paris on Halloween one year, I hid in the apartment, lights out so the kids wouldn’t trick-or-treat me. I was depressed, didn’t want to deal.

In my sister’s town, kids rarely trick or treat any more (well, half the town is Seventh Day, so no surprise). Instead, they dress up and go downtown, the streets closed for their impromptu Halloween parade. They go from store to store, the retailers handing out candy. Or they go to the local high-school for trunk-or-treat, where the high-school kids decorate the trunks of their cars in the and hand out candy in the parking lot. Sometimes there’s a haunted house in the little theatre, peeled grapes, talking heads.

Ritual is important. Tradition. The carving of the jack o lantern. The dressing up. The being out with others, after dark. The feast of candy.

Too often, when we grow up, we lose sight of the joy in holiday traditions. Thanksgiving becomes about racing around searching for crazy ingredients, then staying up all night to cook, and inviting – or not inviting – people to the feast. Christmas becomes about making yourself crazy purchasing, wrapping, then cleaning up after so many presents that it’s ridiculous (if I had kids, I’ve said one time too many at Christmas for the parents in my family, they’d get a box of crayons, some paper grocery bags, and some big empty boxes – that’s all they really need to be happy). New Year’s becomes about forcing yourself to stay up later than you’d like and skipping between channels to watch the ball drop.

So tonight let’s get back to the meaning of Halloween.

Let’s get back to joy.