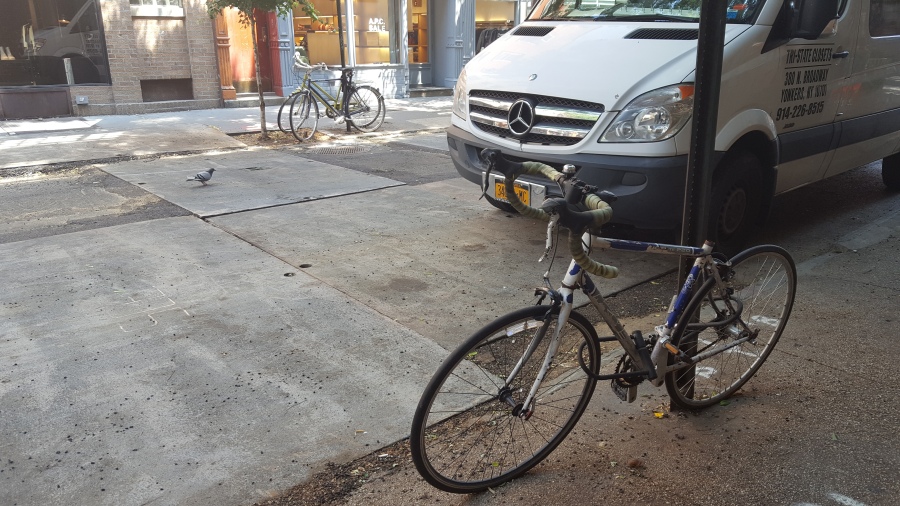 Another sprint stage – flat but there is a category 4 climb just past the intermediate sprint. The roads here are long, straight, and flat – which makes it difficult for a break to get away. Another tricky finish, with a series of roundabouts, speed bumps, and some tight turns.

That said, at 99.5 miles, there are three riders off the front and the peloton is 4:47 back. Lotto and Quick Step are on the front into the headwind, closely followed by Sky.

The announcers are talking again about whether the other sprint teams should be working at the front or saving their strength by forcing Quick Step to do all the work to chase down the break. The other point of view seems to be that the team needs to sacrifice one domestique at the front to send a message to the sprinter that they trust and believe in them.

94 miles: the peloton has increased the speed and cut the lead to 3:47. One of the riders in the break is a time-trial rider, which means that he can ride long distances on his own – a scary thought for the sprinters whose strategy is to gather the sprint points while they can — because tomorrow we’re in the Pyrenees, and the sprinters will drop to the back of the group and just be happy to finish at all.

The GC contender strategy today is to conserve energy for tomorrow and survive the chaos of the sprint.

86.8 miles and the peloton has cut the lead to 2:33. We’ll see where they hold the time – if they catch the breakaway too far out, they risk having another break take off the front and having to chase them down. It could be better – they could get a break without a time-trialer but it could be worse…

72.9 miles and the peloton is indeed keeping the break at around 2:30. Hm, a mile later ad the lead has grown to 3:45, and now 4:00. The break has just lifted the pace a little in response. The breakaway riders have no hope of getting the yellow jersey – if they did, the peloton would have pulled them back no question at the start of the race – they’re just riding to keep their sponsors on camera, and for a stage win if something happens to the peloton and they can stay out in front to the end.

67.5 miles and the peloton has woken up and pulled the break back to just under two minutes.

57.8 miles and a crash just past the feed-zone – looks like a musette bag in the wheel again or maybe a full water-bottle fell into the road and someone rode into it. It looks like Cataldo, an Astana rider, is out with a broken wrist. They speculate that Fuglsang (in 5th for the yellow jersey) also went down, then took his teammate, Cataldo’s, bike and left. The peloton has moved on, pursued by about 30 stragglers – including one of the sprinters – who are weaving their way through the caravan of cars to catch the back of the group. He’ll have to expend energy that he needs for the finish just to regain the field. It sounds like Astana’s car has just pulled over – grabbing his spare bike. They just showed him at the medical car, holding on to the side while they treat his wrist with cold-spray. Now he just needs to get back to the front of the field to put him in front of any other crashes that happen so he doesn’t lose time to the other GC contenders.

The sprinters are lining up for the intermediate sprint – they’ll be sprinting for fourth place, since the 3-man breakaway already went through and took the top three places. Fourth place is 13 points, and Michael Matthews is setting up his train. Matthews and Kristoff battled it out, with Kittel cruising in third. Kittel got 10 points for crossing in sixth; so he keeps Matthews close without expending too much energy.

35.9 miles, they had just started the climb when a bunch of riders in the middle of main field hit the pavement. FDJ had several riders involved, one of which is waiting for his team car with a new bike. Bahrain was also involved and is waiting for bikes. Another reason to keep the speed high – it keeps riders on their toes and forces them to pay attention. The peloton is split into three groups – the group who was in front of the crash; the group that was delayed by the crash; and the group that actually went down and is picking their way back through the peloton to regain the group. You’d think the crash would be an advantage for the breakaway – especially since it looks like the peloton has slowed way down to let the crashers catch back up –  but the gap is down to 1:25. Apparently Roman Bardet (3rd in yellow jersey race) and sprinter Michael Matthews were in the crash and are now chasing their way back.

19.2 miles and the break only has 30 seconds. They’re on a long, shade-lined road and the front of the peloton is laser-focused on the back of the breakaway riders.

Bodnar, the time-trialer in the break, just shot off the front and left the other two behind – they’ll probably get swept up by the peloton soon. Bodnar’s team, Hans-Grohe, lost Peter Sagan and Rafael Mika earlier. A stage victory for Hans-Grohe would be a good boost for the team and the sponsors.

By 14.5 miles, he has about 40 seconds on the peloton. He’s riding between three and five MPH faster than the front of the peloton.

Contador and one of his teammates just crashed at the back of the main field. Contador got back up and rode off but his teammate doesn’t look good: he made I back on his bike but he’s riding very gingerly and his shirt is in tatters. Apparently the doctors only pull you from the race if you have a head-injury; otherwise it’s your choice. A few minutes ago, they interviewed Degenkolb, the sprinter on Contador’s team, and asked if the team would put their energy to helping him win the sprints since Contador is so far back in the GC contention, and his answer was No, we’re still riding for Contador, and I’m on my own in the sprints. (Before the race, the commentators say, Degenkolb was telling them that he was only there to support Contador, not to sprint for stage wins; so you can see a shift in strategy.) Contador just regained the back of the peloton, but he had to make up over a minute. Now they’re trying to shepherd him to front of the main field to avoid losing time in the crashes.

Bodnar is still 46 seconds in front of the peloton but he’ll have to maintain or increase his gap over the next ten miles.

Bodnar descending a small hill, 40 MPH but he’s not sitting on the top bar of his bike – he’s hanging off the side of this bike to get even lower. It’s unlikely he can stay away until the end but if there’s another crash that will help. Quick-Step was on the front, followed by Lotto – and then the other sprinters realized that they needed to bring him back if they were going to have a chance to get to the line first. So now Quick Step is getting some help from the other teams, but it’s sporadic; they’re not riding in a chain gang.

4 miles and the peloton just turned onto a long straight road which means they have Bodnar in their sights. There are three lines of sprinter teams now, Katusha on the left, Direct Energie, and Lotto Jumbo.

3 miles and Bodnar’s still away by 25 seconds and into the turns of the town; so the peloton will lose track of him. He’s still going just as fast or a little faster than the main field.

2.4 miles and the sprint teams are fighting for first position at the front of the peloton, but Bodnar’s still 16 seconds out.

Now the peloton is riding 2-3 MPH faster than Bodnar and the sprinters are organizing. 12 seconds.

1.3 miles and they’re breathing down his neck…

The peloton caught Bodnar just before the line and Kittel takes the victory!

The jerseys stay where they were again. Degenkolb didn’t place in the final sprint – maybe he was hurt in that crash.